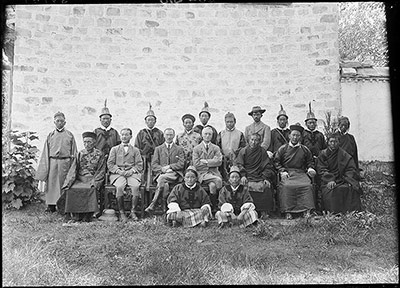 Lhasa Mission group. Sir Charles Bell - second row centre; Lt Col Robert Kennedy on his right, Tsendron Kusho on his left; David Macdonald seated on Kennedy's right, and Palhese next to him; Purbu orderly sitting on ground on Bell's right, Rabden orderly seated next to him

Other Information - Dates: David Macdonald (second on the left from bell, facing) made an unofficial visit to Lhasa in December 1920 and was allowed to remain in the city for one month until he was asked to leave by the Tibetan Government [MS 23/02/2006]