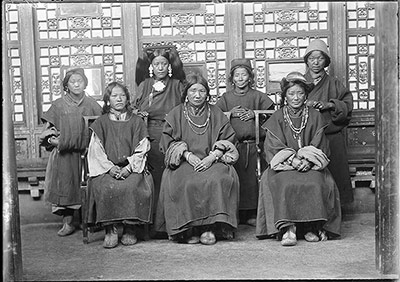 Group of seven women from the Po country, four standing, three seated. One woman wearing Lhasan-style head-dress (second from left, standing). Photograph taken in a room with carved panels behind, edges of wooden pillars visible at either side

Manual Catalogues - Bell's List of Illustrations entry: "[No. of chapter] LVI. [Subject of Chapter] Tribes to the South [Subject of Illustration] H.304 (a) Women from the Po country and one Lhasan woman with Lhasan head-dress in the back row, second from the left. [Remarks] L.280"

Other Information - Historical Background: Bell's Diary entry for 16th May 1921:"The present ruler of the Po country has an agent in Lhasa now who is asking the Tsarong Shape to give his sister as wife to the ruler of Po. Palhese tells me that "These rulers often take a Lhasa lady to wife, but are unable to get from the best families, as their country is not only a long way off but lawless. Sikkim on the other hand, though distant, is quiet and law-abiding, and so the Sikkim rulers are able to get their wives from the best families." [Vol. X., p.54]