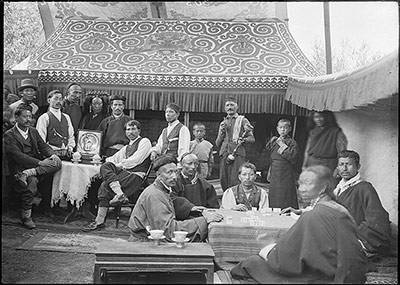 Group of Nepalese men and boys, standing and sitting at two tables playing Chinese dominoes, ba, next to an applique tent awning.

Other Information - Cultural Background: Bell's Diary for 5th May 1921 reports the following information as told to Bell by Kusho Palhese:"The people of Lhasa repair to the ling-kas for picnics mainly between the 3rd and 7th months (say) from May to August inclusive. Riding today through some of the ling-kas I came across fourteen or fifteen of these picnic parties. The Chinese and the Ladakhis usually had a white tent roof, gaily ornamented with the usual blue desings, over their parties, while the Tibetans sat under trees with only a cloth some five feet high stretched along one side to keep off the wind." [Vol. X., p.51]

Other Information - Cultural Background: On 25th May 1921 Bell discussed popular forms of Tibetan entertainment with Kusho Palhese and this prompted the following Diary entry, made on 28th May 1921 in relation to the games of Ba and Sho :" Ba played also in lingkas . This is a Chinese game of dominoes. It is played by four persons, and involves a good deal of gambling. // Sho is a game played with dice which also involves a good deal of gambling. Sho is the national Tibetan gambling game, played by all, high and low, the peasantry included. Ba is a Chinese game and requires considerable skill to play as well; its devotees are found almost solely among the upper classes. Among parties in lingkas , people playing sho will very often be found" [Diary Vol. X., pp.86-7]