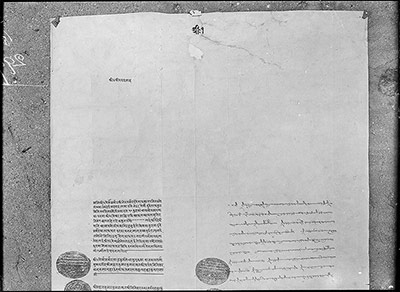 Other Information - Setting: Bell's Diary entry for 4th April 1921: 'Some time ago I discussed with the D[alai] L[ama], in one of our private talks, the Tibet-Nepal Treaty of 1856. I had pointed out to him, with reference to the Tibetan claim of independence of china, that in our translation (Aitchison's Treaties, Vol II, Introductory note to Nepal Treaties), Tibet and Nepal both acknowledged allegiance to China, and I suggested that the original Treaty should be seen in order to ascertain exactly how the matter stood, so that the T.G. might be ready with an answer to China, if the latter should raise the question. The D.L. informed me that he would call for the original Treaty ostensibly with reference to the various boundary and other disputes between Tibet and Nepal; the Treaty is kept in the offices of the Council. When he had done so, he told me that he did not think the terms of the Treaty recognised any allegiance to China. He added that he would send the original for me to see. // Accordingly today the Dronyen Chempo brought this original of the Treaty as well as the original of the Boundary Treaty of later date. They are written in Nepalese down the left side and Tibetan down the right. He proposed to leave the originals with me for a few days to enable me to have copies made of them, a great sign of friendship and confidence, considering the high importance of such documents. I asked him however to take them back to Norbuling and I would send Tashi Babu and R.S. Norbhu tomorrow to copy them there. It would never do if anything happened to them - or, later on, was thought to have happened to them - during the day or two that they remained in my custody" [Vol. IX, pp. 75-76]