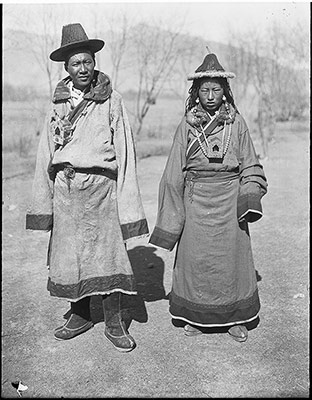 Golok man and his wife come to Lhasa for trade

Manual Catalogues - Bell's List of Illustrations entry: "[No. of chapter] LI. [Subject of Chapter] Tribes to the East [Subject of Illustration] H.283 (e) Golok man and his wife come to Lhasa for trade; they bring salt, dried meat etc. In their own country they are inveterate brigands. [Remarks] L.261 (Y in L)"

Other Information - Cultural Background: The Golok region of Tibet lies to the extreme east of Lhasa adjoining the Amnye Machen mountain range. In "Portrait of the Dalai Lama", Bell comments that Golok means, "head turned round, i.e. 'a rebellious people'", but that "these men of Golok who rob travellers and even caravans passing through their own country, come to Lhasa and other parts of Tibet as semi-peaceful traders, who are tolerated as such." (p. 285) The couple pictured may well have visited Lhasa to trade, but the fact that they wear their best long-sleeved 'Chuba' (gown) and 'gau' (amulet boxes) also indicate that their journey was a pilgrimage. [CH, 03/04/2000]