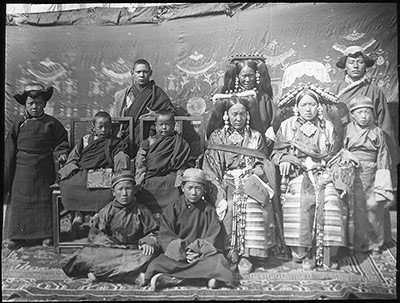 Members of one of the noble families of Lhasa, the Ragashar family. Textile hanging behind them. Sitting and standing on carpet.

Other Information - Dates: Bell went on a short tour north of Lhasa at the beginning of April 1921. In his diary for 17th April he states:"On the way [back to Lhasa] a servant of Rakashar met us with an invitation to his house, 8 miles or so out of Lhasa. We spent a very pleasant hour conversing with the head of the family, a Depon recently returned from Eastern Tibet. Poor man, though only 35 years old (Tibetan reckoning), he is crippled with gout." [Vol. X, p.22]

Exhibition - Photograph caption from Seeing Lhasa exhibition at Pitt Rivers Museum, 7 September 2003 - 30 November 2004: "The Ragashars are one of two Lhasa families who trace their ancestry to the religious kings of Tibet (7th -9th centuries). The boys described by Bell as servants were probably employed as playmates for the young incarnates.