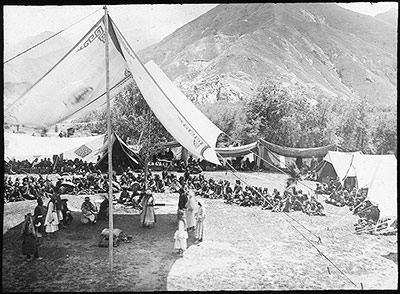 Bell's Ache Lhamo. Actors seen under large decorated tent to left of image. This is the stage. Around the main tent there are other smaller tents. Spectators sitting. Mountains in background.

Notes on print/mount - '42' has been written in blue-black ink. This slide seems to have been used as slide 42 in the lecture 'A Year in Lhasa', which was first presented at the Royal Geographical Society on 3rd December 1923. The text, with a lesser number of images, was later published in The Geographical Journal of February 1924. Bell may also have presented this lecture on other occasions about which we have no information at present. [MS 24/8/2004]

Other Information - Setting: Bell's Diary for August 12th 1921:"Today is the first day. The play known as "Chinese and Nepalese Princesses" ( Gya-za Pe-za ) is acted. The troupe is that of the Gyan-pa-ras . All the parts are taken by men in this and all the other troupes, except that of the Kyor-mo Lung-ngas , who alone employ women, and that only in some of the actress parts. This play tells the coming of the Chinese and Nepalese Princesses to Tibet as wives for King Songtsen Gampo." [Diary Vol. XI, p.90]