Picnics at the gun and arrow shooting 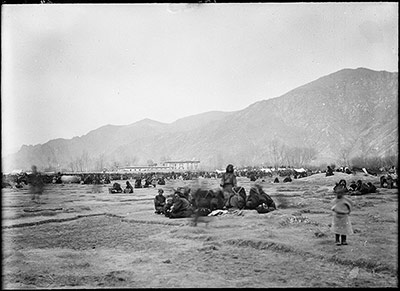 General view of picnic parties at the Dzonggyap shambe or `The gallop behind the fort'. Tents can be seen in the background, as can Lhalu Mansion in the far distance.

Other Information - Photographer: Photograph re-classified as Rabden's because Bell's Diaries for this event describe Bell being seated in one of the tents seen in the distance and there is no description of him walking around the scene. This is typical of the kind of image that would have been more appropriately taken by Rabden than by Bell himself [MS 2/6/2004]

Other Information - Setting: This takes place on the 26th Day of the 1st Tibetan Month. A competition between the men of Yaso's(commanders of feudal cavalry at New Year Ceremonies) cavalry in a display of marksmanship at targets suspended beside a runway in a meadow north of the Potala and south of the Lhalu mansion. Lesser officials sit on the ground in order of precedence. Usual formalities; scarves, tea. Each squadron provided by the noble houses of Lhasa then takes part separately. The horsemen ride down the runway firing with a matchlock with antelope horn prongs at the first target, then rapidly swinging the gun round their backs they grab the bow and take an arrow from their quiver ready for the next target. This day ends the formal ceremonies of the New Year.