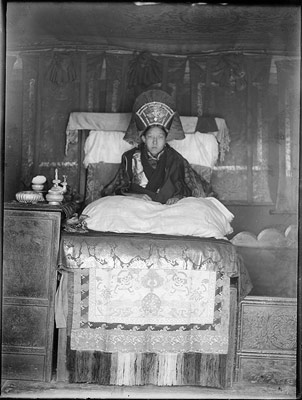 Dorje Pamo on her throne at Samding Monastery. Her outside robe is woollen, her inner robe is of silk. A white silk cloth is spread over her knees. On the table to the left is a broad low bowl for fruit, a flower vase, a bowl for rice behind which is a vessel for holy water. These vessels are all made of silver. Behind her head has been stretched another white silk cloth. Below her and hanging down in front is a white silk cloth ornamented with patterns of flowers.

Manual Catalogues - Bell's List of Illustrations entry: "[No. of chapter] XXI. [Subject of Chapter] The Women. [Subject of Illustration] H.119 (v) Dor-je Pa-mo on her throne at Samding, ready to bless pilgrims. her outside robe is woollen after the pattern of lamas'; her inner robe is of silk. A white silk cloth is spread over her knees, as in the case of the Dalai Lama. On the table to the left is a broad low bowl for fruit (left), behind it a flower vase, on right front is a bowl for rice, behind this last is a vessel for holy water. These vessels, which are all of silver, she uses in her worship. Behind her head another white silk cloth is stretched. Below her, and hanging down in front, is a white silk cloth ornamented with patterns of flowers. [Remarks] L.105 [Lantern slide 105] (Y in L)"

Other Information - Photographer: Bell states in The People of Tibet , Oxford: Clarendon Press. 1928, p.168 that Rabden Lepcha took the photograph[s?] of Dor-je Pa-mo, although this seems to have been at a stage when Bell considered him keen but relatively inexperienced. The images of Dor-je Pa-mo are not focused well, although this also recalls the images of the Dalai Lama, and may be a product of long exposure in a dark room (Bell also states [1928:168] that an assistant of the Dalai Lama had tried to photograph her some time previously, but the attempt had failed). Rabden appears to have experimented with both a portrait and a landscape shot, of which the former (which includes the throne in full) was selected for publication in 1928 [plate opposite p.166], although with some intensifying of the image to enhance the detail of the textiles on the throne, which are described in detail in the text [MS 26/5/2004]

Other Information - Description: '... 'The Thunderbolt Sow', of Sam-ding Monastery ... the only female Incarnation in Tibet, is one of the highest of all Incarnations. She is reputed to have the power of transforming herself into a sow ... It was my privilege to visit her on my way to Lhasa, accompanied by Mr. Dyer, our doctor from Sikkim. We were the first white men to be received by her, indeed the first she had seen. ... Our clerks, our servants, and Ku-sho Pa-lhe-se himself, though of noble birth, all bowed low before her and presented their offerings, while she blessed them, one by one, touching each on the head with her hand ... One of my orderlies, Rabden Lepcha, had already to some extent learnt from me how to use my cameras, and was taking my photographic work more and more into his own hands. After I left he stayed behind under the aegis of Pa-lhe-se, and the goddess very willingly allowed him to take a photograph of her. ... To Pa-lhe-se she expressed surprise as well as pleasure that I was able to converse with her in Tibetan, 'for', said she, 'to talk to one who cannot understand and reply easily is like one simpleton babbling to another." [ The People of Tibet , Oxford: Clarendon Press, 1928: 164].