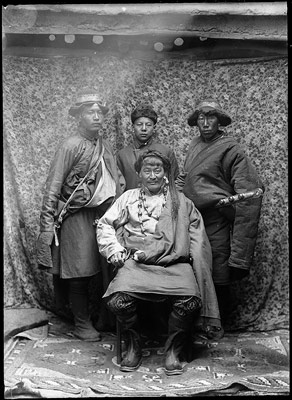 Wealthy trader from Eastern Tibet (seated) with three servants standing behind him. The trader wears a double necklace of corals and onyx around his neck. Image is taken against a floral textile background suspended from the beams of a building. Carpet on floor.

Technical Information - There appears to be a flaw in the image across the top left corner, which seems to have been created by problems with the emulsion [MS 26/5/2004]

Contemporary Publication - Published in 'The People of Tibet', Bell, C. A., Oxford: Clarendon Press, 1928, facing p.111:"Wealthy merchant of eastern Tibet with servants. He wears a double necklace of corals and onyx. Scabbard of servant on right holds three corals, as is usual in eastern Tibet." [MS 10/9/2004]