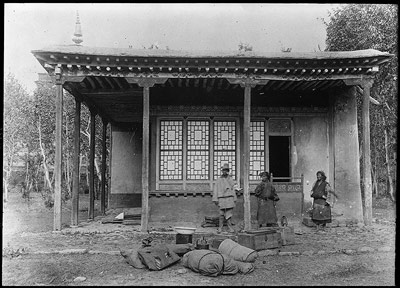 The drokhang (pleasure house) of the Kungtang family, where Sir Charles Bell stayed for two or three days in May 1921. Three people standing in front of building, possibly servants

Manual Catalogues - Bell's List of Illustrations entry: "[No. of chapter] XVI. [Subject of Chapter] The Aristocracy. [Subject of Illustration] H108 (t) The trokhang of the house of the Kungtang family, where we stayed for two or three days. [Remarks] L.77 [lantern slide 77]"

Other Information - Dates: On May 20th, according to Bell's Diary, he travelled to Kungtang, 5 miles from Lhasa up the Kyi Chu Valley, to witness the religious ceremonies that commemorated the birth of Gotama Buddha, the enlightenment of Gotama Buddha and his entry into Nirvana. May 21st 1921 was the day on which these three events were to be commemorated [Diary Vol X, pp. 64-5]