Ragashar and wife, with group 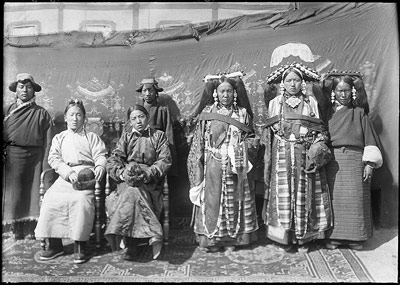 Other Information - Setting: Bell went on a short tour north of Lhasa at the beginning of April 1921. In his diary for 17th April he states:"On the way [back to Lhasa] a servant of Rakashar met us with an invitation to his house, 8 miles or so out of Lhasa. We spent a very pleasant hour conversing with the head of the family, a Depon recently returned from Eastern Tibet. Poor man, though only 35 years old (Tibetan reckoning), he is crippled with gout." [Vol. X, p.22]