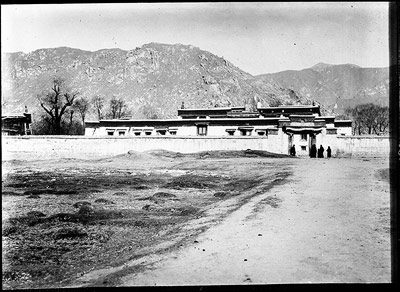 Middle distance view of Lhalu mansion on the outskirts of Lhasa. Group of people by entrance gate, hills in the background.

Contemporary Publication - Published in 'The People of Tibet', Bell, C. A., Oxford: Clarendon Press, 1928, facing p.78:"Lha-lu Mansion. Reckoned by the Chinese as one of the five beauties of Lhasa."

Other Information - Related Images: Bell does not distinguish between H.101a and H.101b [1998.285.112 and 1998.285.114] in his List of illustrations and both images are referenced by the caption for H101. Image 1998.285.112 is a re-photograph of 1998.285.114. The main difference seen in the contact prints is that the image of the re-photographed negative is sharper, especially on the left side and around the group of people. The negative glass plate of 1998.285.114 is also suffering from more extensive silvering, suggesting that the emulsification/production process was less well achieved in this negative. [MS 18/5/2004]

Other Information - Description: Bell visited the Lhalu mansion on Monday 14th March 1921. He describes the experience at some length in his diary for that day: 'We visited Lhalu mansion. The two Dukes (Kung), father and son, have died recently and none of the family are living in it. It is given over to servants, lacks cleanliness and has a general air of desolation. The mother and wife of the elder Duke - the younger died when sixteen years old, - live elsewhere in Lhasa. They cannot stand living in Lhasa after their bereavements, and even contemplate making over all the property to the Dalai Lama. // The house was largely rebuilt a few years ago and to this fact Palhese attributes the family misfortunes. He recalls the Tibetan saying, "If a house is rebuilt, the pillar falls," a saying which betokens the death of a member of the family. // In four or five of the rooms small parties of monks are reading aloud from books of prayer. In a large hall down below 15 or 20 more are singing chants from memory, their bodies swaying from side to side as they sing. By these services it is hoped to render more easy the passage of the deceased through the Buddhist purgatory, and to ensure them good births, when they next return to earth. // We have the usual tea, cakes and fruit in a large room, which, as so often happens, is chapel and sitting room combined. But it is unusual in that it faces to the north. The Tibetans usually arrange for their best rooms to catch as much sunlight as possible." // In one of many rooms I see a large gilt model of a chorten and I enquire about it. It was set up when the elder Kung died, to ward off further misfortune, but alas! to no purpose. ... One of the main rooms we see has whitewashed walls and photographs, mostly of Chinese worth[ies?] hung very high on the walls, which are otherwise perfectly bare. A particularly cheerless room, and we can think no better of it, even when we are gravely informed that it is the 'English Room' being furnished in the English style. I wonder from what desolate Indian bungalow the idea can have been taken. // One very small room, about ten feet by five, with a good plank floor is shown as the room where the master of the house slept and prayed during each winter. His bed lies across the window and the room is cheerful with Chinese painting of a frivolous order.// We see also the rooms where Younghusband, White and O'Connor lived, though now much altered by the rebuilding and reconstruction of the house. // In one of the chapels the paintings (tang-ka) are on very fine Chinese silk. In the rooms, nearly all of them, are valuable old pieces of china and cloisonne, three or four pieces in each room. Non-religious paintings ar on the walls of many rooms, these are after the Chinese style. The religious paintings (tang-ka) are of course all after the Tibetan style. // In the verandah of the summer house (tro-khang) which is in the park (ling-ka) outside is a box with a pair of guinea pigs in it. An enquiry as to where they came from brings the reply, amid laughter, that they belong to the Dalai Lama, who receives so many presents of animals, that his subjects have to help him in looking after them. // Lhalu is regarded as one of the beauties of Lhasa, and so it is. But at present it is unhappy, desolate" [pp. 34-38]