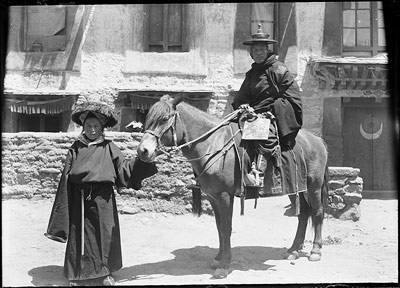 The Dalai Lama's aide-de-camp, Tsendron Kusho, on horse being led by attendant. When riding the Tsendron wears a gold hat, but not when walking. The attendant is wearing a winter hat and the group are standing in a courtyard outside a house. The architectural joists of the house can be seen above the doorway and the door has been painted with an upturned crescent shape supporting a circle

Manual Catalogues - Bell's List of Illustrations entry for H.90: "[No. of chapter] VII. [Subject of Chapter] The Regent and Central Government. [Subject of illustration] H.90 (h) Dalai Lama's A.D.C. [aide-de-camp] riding. When riding wears his hat, but not when walking."

Other Information - People: Tsendron Kusho was one of the secretaries of the 13th Dalai Lama appointed to attend on Sir Charles Bell's mission during their stay in Lhasa. Bell spent a great deal of time with the Tsendron whilst he was in Lhasa, including visiting Ganden Monastery with him in April 1921. Bell and the Tsendron would typically ride on horseback when making their excursions in and around Lhasa. Bell repeatedly cites the Tsendron in his Diary as a source of information and summarises conversations that later fed into his publications [MS 02/02/2006]