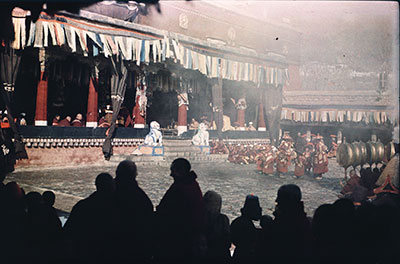 Exhibition - This image appeared in the 2003 Temporary Exhibition at the Pitt Rivers "Seeing Lhasa: British Depictions of the Tibetan Capital 1936-1947

Other Information - Description: "On the following day, 14th February, all the officials, including the Regent and Prime Minister, had to go to the monastery of the State Oracle. We had not been invited to attend this, but Tsarong thought it would be a good chance for me to get some photographs, and offered to take me with him and to look after me. // ... Tsarong found a place for me just beside the entrance but beneath the cloister roof, so I was fairly inconspicuous and the light was excellent. I collected a small table to stand on so that I could take photographs above the heads of the crowd who half-filled the court" ['Lhasa: The Holy City', F. Spencer Chapman, London: Chatto & Windus, 1938, pp. 315-6; for full description see p. 315 ff] [MS 22/03/2006]

Other Information - Cultural Background: Hugh Richardson, in a letter to his parents, commented on this event “I would like to have gone but if one goes officially the Tibetan Govt has to make special arrangements” [Bodleian Library, Richardson Archive, MS Or Richardson 3 folio 64] [MS 22/03/2006]