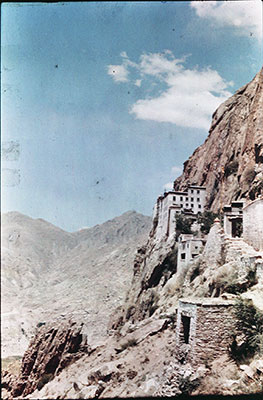 Technical Information - This transparency may have been made in reverse and thus would need to be flipped to be viewed correctly. However, it is also possible that the image has been taken from the other side of the ridge upon which the Monastery has been built. The location of the image, therefore, requires confirmation [MS 07/04/2006]

Other Information - Related Images: This image can be related to black and white photographs of this place in the sequence 'C.8'. Images prefixed with 'C.8' comprise a group of negatives containing images of the Potala and Lhasa, officials coming through Pargo Kaling, Turquoise Bridge, Tsarong, Trimon, views from and of Sera, a woman washing clothes, shepherd with sling, football teams. They were possibly taken between October 13th - 20th 1036. This image may have been taken between October 14th - 17th 1936, as on these days there were no official engagements according to the official mission diary, which might have enabled Chapman to travel further into the Lhasa valley to take photographs, as he tended to do when he had the opportunity [MS 21/03/2006]