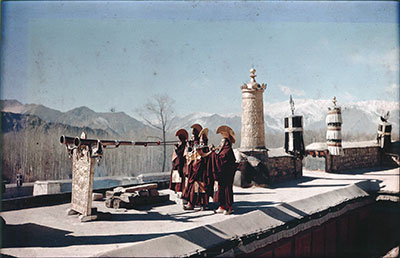 Other Information - Setting: Gelukpa monks blowing ceremonial trumpets on the roof of Kundeling monastery. Founded in the seventeenth century, Kundeling was designated as one of the four royal monasteries of Lhasa by the fifth Dalai Lhama. The members of Gould's Diplomatic Mission were familiar with the place since they lived in a house owned by this monastery during their stay in Lhasa. [CH 2003]