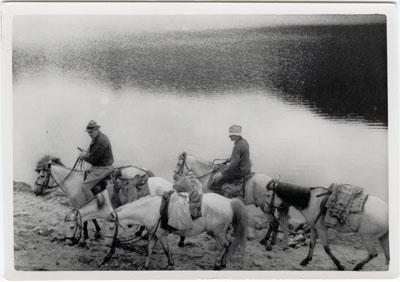 Two members of the British Mission on horseback by Changu Lake before the Natu La Pass into Tibet. Sir Basil Gould is on the left, Evan Nepean is on the right

Manual Catalogues - Caption in Chapman's hand-written list of negatives made whilst on the Mission to Lhasa, 1936-7 [See PRM Manuscripts Collection]: 'Horseman by Changu Lake’ [MS 08/04/2006]