Tomb of the 13th Dalai Lama in the Potala Palace 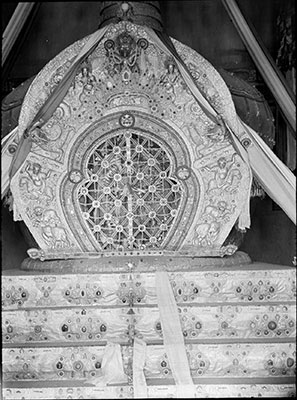 The topmost part of the 13th Dalai Lama's tomb in the Potala Palace.

Other Information - This photograph may have been taken on either September 6th or November 22nd 1936 as Chapman describes in the official Mission Diary on these dates that the Mission members were permitted to see the innermost areas of the Potala Palace. Chapman wrote a brief description of this tomb in the official Mission Diary for September 6th 1936: "Finally we saw the last Dalai Lama's (the 13th incarnation) recently completed tomband shrine. This is the most striking thing in the Potala. In many previous shrines we had seen masses of heavy gold butter lamps and jewel encrusted images, but this place must contain a fortune in solid gold and fabulous sums in jewels. For the shrine consists of a "Chorten" 30 or 40 feet high, the whole of it covered not merely with gold leaf but with solid sheets of gold, in which are embedded all manner of precious stones, turquoise predominating. In front there were rows of gold lamps, cloisonnee and China vases, and one vessel entirely covered with pearls. Hung all round are rich silk brocades and other subsidiary jewelled images. // Unfortunately this lofty chamber in which this "chorten" is housed is too confined to enable one to get a comprehensive view". [MS 11/4/2005]

Other Information - Chapman wrote a relatively extensive description of this tomb and the structural alterations that its construction had necessitated upon the Potala itself in his book Lhasa the Holy City [London: Chatto & Windus, 1938; reprinted London: Readers Union Ltd., 1940]. Chapman wrote: "The main chorten is encased in gold embossed with different designs and plentifully encrusted with precious stones. In some places valuable charm boxes, turquoise ear-rings, onyx and coral snuff-boxes, strings of amber and pearls, and innumerable unset gems have been let in to form designs on the gold background. On several shelves in front are displayed more precious presents, gifts from the ancient and noble families of Tibet and from the rich monasteries of China and Mongolia. Here are rare porcelain vases, exquisite examples of cloisonne work, chalice-like vessels of solid gold, meticulously wrought metal-work, alabaster models of temples, and glass cases containing curiously fashioned flowers with leaves and petals of china. On the eastern wall of the room are pigeon-holes containing holy books with carved wooden covers, many small images, and filigree charm-boxes such as are carried by travellers. // In front of the shrine burn several enormous butter-lamps of solid silver. They stand four feet high, and the bowls, with a tow of burning wicks floating in the fat, are more than two feet in diameter. Each wick has melted a little lake for itself in the congealed butter. White scarves had been thrown up on to the chorten by pilgrims, and there were vases of artificial and real flowers in different parts of the shrine, while the square wooden pillars surrounding the tomb and supporting the roof are covered by long brocade strips of different colours, each hanging over the next like the scales of a fish. Although certain details of the tomb, such as teh crystal globes hanging from the ceiling and a coloured biscuit-tin on one of the shelves, struck a false note, the general impression is a fitting tribute to the memory of this revered ruler" [1940, pp.179-80] [MS 11/4/2005]