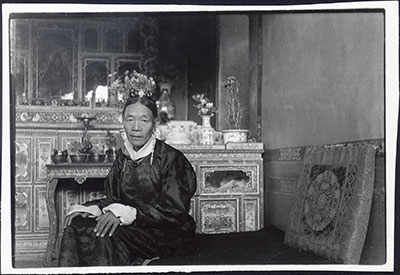 The Yapshi Phunkang Kung, an hereditary title given to the father or brother of the Dalai Lama commonly translated into English as `The Duke'.

Manual Catalogues - Caption in Chapman's hand-written list of negatives made whilst on the Mission to Lhasa, 1936-7 [See PRM Manuscripts Collection]: 'Duke sitting in his house' [MS 06/04/2006]

Biographical Information - The Yabzhi Phünkang Kung (known to the British as “The Duke”) was a member of the Lhasa aristocracy and later became a shappe in the Tibetan government. The title of kung (or “Duke”) is given to the father or brother of the reigning Dalai Lama (in this case the Phünkang was the name of the family of the11th Dalai Lama). As the title is hereditary there are usually a number of kung living at the same time. The Dalai Lama often comes from a poor family so the title of kung carries with it considerable estates. The kung used to be the highest status layman in Tibet but the 13th Dalai Lama made the office of Prime minister even more exalted. Spencer Chapman describes the subject of this portrait thus: “The Duke … is a tall lean man with such bad sight that he has to hold everything up to his eyes before he can see it. He gives the impression of being completely absent-minded and unpractical in a very aristocratic and charming way.” (1938:79) [CH 2003]

Other Information - Setting: Entry in Mission Diary for September 30th 1936: "We lunched with the Yapshi Phunkang Kung (Duke) who is accompanying the Regent on his forthcoming visit to Samye monastery. Tsarong Dzasa was present and we had a quiet friendly party. // In the evening Ringang came in with his wife and small son. They stayed to dinner and saw some of our cinema films" ['Lhasa Mission, 1936: Diary of Events', Part VII p. 2, written by Richardson] [MS 06/04/2006]