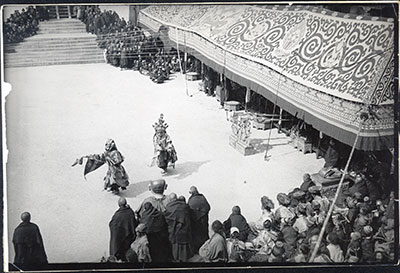 Notes on print/mount - The back of the print is covered in crop marks and reproduction instructions. The reference 'OB 16' has been written on the back of the print in pencil, as has the caption 'New Year Lama dance at Potala'. A thin piece of paper has been stuck across the top edge on the back of the print, which would have been used for transferring crop and reproduction instructions from front to back. 'Spencer Chapman' has been written on the front of this piece of paper (apparently not in Chapman's own hand), and the caption has also been repeated [MS 04/04/2006]