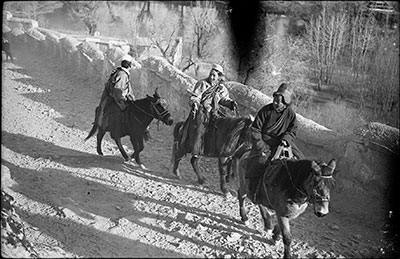 Two officials in gyaluche dress and attendant riding up to the Potala for New Year Festivities.

Manual Catalogues - Caption in Chapman's hand-written list of negatives made whilst on the Mission to Lhasa, 1936-7 [See PRM Manuscripts Collection]: '2 Geluchy officials and syce (light in)’ [MS 03/04/2006]

Technical Information - Chapman had repeated problems with the Zeiss Super Ikonta camera that he used, indeed they were well-known for having faulty shutters, and in his handlist he states that the original image had 'light in' [see Manual Catalogues]. In other images in this sequence he has cropped the flawed sections of the image but he was clearly not able to do so in this image and the light flash is evident at the top of the negative [MS 03/04/2006]