Mondo and Ringang riding up to Potala at New Year 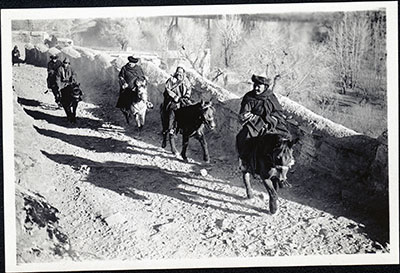 Mondo, followed by Ringang in gyaluche dress, and other officials riding up to the Potala for New Year Festivities

Manual Catalogues - Caption in Chapman's hand-written list of negatives made whilst on the Mission to Lhasa, 1936-7 [See PRM Manuscripts Collection]: 'Mondo and Ringang riding up to Potala’; PRM Manuscripts Collection: ‘List of Tibetan Prints and Negatives’ - Book 3: ‘1/2 - Mondo and Kyipup, two old Rugbeians riding up to the Potala for New Year celebrations (Feb. 1937). Snake Lake temple in background'. Note: Although Chapman initially identified the official in this image as Ringang, the later handlist (possibly written by Basil Gould, although this is not certain) identified him as Kyibu and this seems to be the more accurate description [MS 03/04/2006]