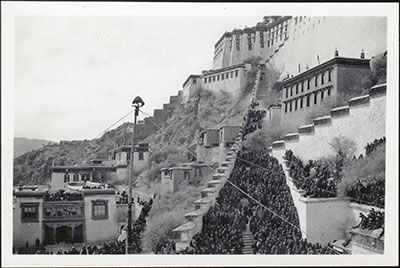 New year ceremony of Namdrotagtse, the 'Sky Dancing Rope Game' or Chakhen Tagshur, or 'Sliding down the rope like a bird'. Performed on 2nd day of the 1st month, King's New Year, at the foot of the Potala. A man can be seen spinning on the top of the pole with crowds watching him from the stairs leading up to the Potala

Manual Catalogues - It seems that this image may be identified as 'D.8' from circumstantial evidence. This number is not written on either of the contact prints. Caption in Chapman's hand-written list of negatives made whilst on the Mission to Lhasa, 1936-7 [See PRM Manuscripts Collection]: '1/2 Man spinning' [MS 02/04/2006]