Officials in gyaluche at Regent's departure 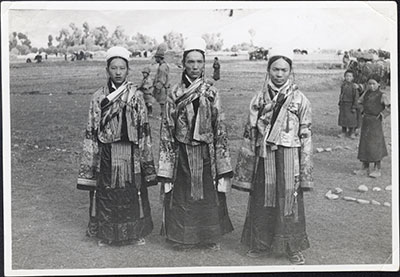 Three officials in gyaluche dress at the Regent's departure for Samye Monastery in October 1936. Children and other onlookers stand in the background

Manual Catalogues - Caption in Chapman's hand-written list of negatives made whilst on the Mission to Lhasa, 1936-7 [See PRM Manuscripts Collection]: '3 officials at Regent’s departure in odd costume' [MS 01/04/2006]

Other Information - Related Images: Images prefixed with 'CX' comprise a group of negatives containing images of Phendong and his house, grinding grain, officials (5th rank), Rupon, doctors, artists at work, official’s at Regent’s departure. They all seem to have been taken between October 2nd - 6th 1936, with this image being taken on the latter date [MS 01/04/2006]

Other Information - Description: Mission Diary entry for October 6th 1936: "All other officials of Lhasa were waiting to receive him at the park. Today they wore a ceremonial dress reserved for auspicious occasions. Those of the highest rank wore yellow brocade robes embroidered with dragons of blue and gold; minor officials wore less resplendent brocade tunics and skirts of black silk; they had, perched on their heads, little white hats like cockle shells " ['Lhasa Mission, 1936: Diary of Events', Part VII p. 3, written by Richardson] [MS 01/04/2006]