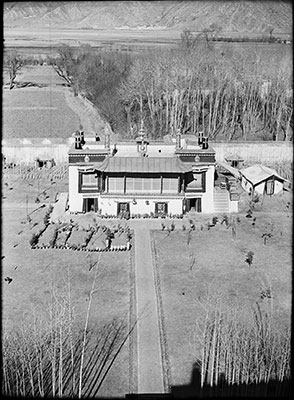 The Regent of Tibet's palace from above, Shide Drokhang. Situated north of Shide monastery which is affiliated to Reting monastery. Decoration on roof - auspicious banners and devil catchers on corners. This image was probably taken from the roof of Shide Monastery, which lies immediately to the south of this summer house

In Negative - '15' has been scratched into the negative in the bottom left hand corner. This has enabled identification of the image as C.17.15 in Chapman's handlist of images made whilst in Lhasa [MS 30/03/2006]

Manual Catalogues - Caption in Chapman's hand-written list of negatives made whilst on the Mission to Lhasa, 1936-7 [See PRM Manuscripts Collection]: 'Regent’s house from monastery roof' [MS 30/03/2006]

Other Information - Related Images: Images prefixed with 'C.17' comprise a group of negatives containing images of Palden Lhamo procession down street, Kalon lama and Bhondong, Regent’s house and monastery. This group of images had been given the heading “‘Queen Vic’ Procession” by Chapman in his handlist. Queen Victoria was reputed to have been an incarnation of Palden Lhamo [see notes for C.17.7]. They seem to have been taken between November 26th - December 11th 1936, with this particular image being taken on December 11th on the occasion of a visit to the Regent [MS 27/03/2006]

Other Information - Setting: Mission Diary entry for December 11th 1936: "We all lunched with the Regent today and afterwards gave a film show in a large room of his own monastery. He was quite delighted and insisted on a three hours performance, only letting us go then on condition that we promised to arranged another show later on" ['Lhasa Mission, 1936: Diary of Events', Part X p. 4, written by Chapman] [MS 30/03/2006]