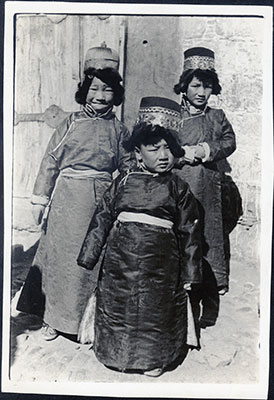 Other Information - Historical Background: Three of Ringang’s (also known as Chango Pa) children in party clothes. Ringang was the official interpreter for the Lhasa Cabinet, educated at Rugby and responsible for installing electricity in Lhasa. The members of the Mission seemed to be incredibly fond of Tibetan children describing them as obedient, lively and intelligent. [CH 2003]

Biographical Information - Chang Ngopa Rinzin Dorje (known as Ringang). Ringang was translator to the Lhasa cabinet and the magistrate of Purang, a district in southern Tibet. As a 6th rank (in 1936) official he could normally only wear silk in his own home and was not entitled to wear the amulet box which higher officials wore on their heads. In 1913 he was one of the Tibetan boys sent (by Charles Bell and the 13th Dalai Lama) to be educated at Rugby school in England. On his return he was responsible for installing electricity in Lhasa. At the time of the 14th Dalai Lama’s installation in 1940 Ringang was a civil officer in charge of organising and commanding the 600 strong cavalry that attended the event. Basil Gould noted: “ As District Magistrate of a distant part of Tibet (where his wife sometimes discharged his duties), engineer of the mint and of the hydro-electric installation and interpreter to the Cabinet, he had his hands full.” (1957) [CH 2003]

Other Information - Related Images: Images prefixed with 'BF' comprise a group of negatives containing images of views down Kambo La to Tsangpo, Khampa people, the postmaster’s school, Tsarong’s family, Mary Jigme, Rumba’s family and Tendong’s children. They all seem to have been taken at the end of December 1936 [MS 30/03/2006]

Other Information - Setting: "Any stranger visiting the Dekyi Lingka this morning might well have imagined either that the Pied Piper had just passed by or that we were starting a school. Actually we were having a Children's Party, and by lunch time about seventy of the sons and daughters of the Lhasa officials had arrived. ... The youngest child, Mary, Jigme's daughter, was only three, but the majority were in their 'teens. They wore silk or broad-cloth robes down to their ankles and high-crowned hats with fur-lined ear flaps. ... As soon as the children arrived they went upstairs for tea and Christmas cake; it was luck that many were late, as there were more than we had expected and it was difficult to find a seat for everybody in our small room" ['Lhasa Mission, 1936: Diary of Events', Part XI, pp. 2-3, written by Chapman] [MS 28/03/2006]