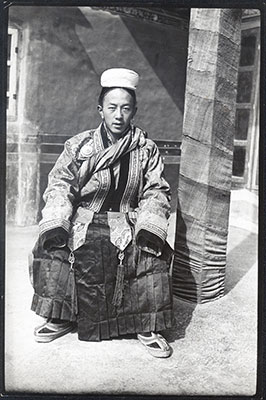 Lhawang Tobgyal Surkhang in ceremonial gyaluche dress as worn at New Year. Seated, with a textile-covered pillar next to him.

Notes on print/mount - The back of this print is covered in crop and reproduction instructions. The reference '5-12' has also been written on the back of the print in pencil [MS 30/03/2006]

Other Information - Photographer: Images in this group were probably taken by Hugh Richardson. Not only is this suggested on the back of print 1998.131.494.1, but circumstantial evidence also suggests this. This kind of ceremonial dress would be worn on the 2nd day of the New Year, which in 1937 fell on February 13th. Chapman was the only member of the mission who was allowed to go to the Potala on that day, where he took photographs and cine film of officials on horseback and of the 'Pole Trick' outside the Potala. Richardson, however, had to visit about eight lesser officials with New Year greetings, some of whom would be wearing special dress prior to or after going to the Potala. As this image seems to have been taken in Surkhang Se's house, given that it is accompanied by photographs of his family, it seems likely that this image was taken by Richardson whilst making a New Year visit [MS 30/03/2006]