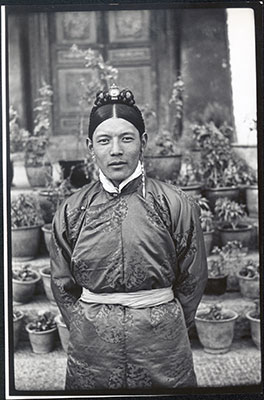 Half length portrait of Jigme Taring standing on the steps of Tsarong's house. Flower pots can be seen behind

Manual Catalogues - Caption in Chapman's hand-written list of negatives made whilst on the Mission to Lhasa, 1936-7 [See PRM Manuscripts Collection]: '1/4 Jigme'; PRM Manuscripts Collection: ‘List of Tibetan Prints and Negatives’ - Book 2: ‘35/2 - Jigme [Tering] a young general in the army and son of Rajah Tering, he was at school in Darjeeling and speaks English’ [MS 28/03/2006]

Biographical Information - Jigme Tering (or Taring) was the son of Rajah Tering of Sikkim. He married Tsarong's 4th wife Mary (Rinchen Dolma) in 1930. He was a Depon in charge of the Army. He wears the official's Earring in the left ear and his hair is tied in a top knot with an Amulet Box (`gau') in the center. This ornament is only worn by Lhasa officials of the first five ranks or by sons of noble families who are employed by the Government. [Marina de Alarcón ZF 1995 4]