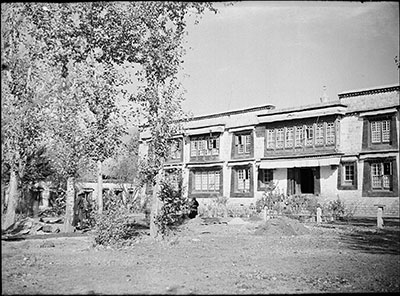 Tsarong's house. Situated between Lhasa city and the Kyichu river. Windows fitted with glass. People in garden. This image was originally the left half of a panorama

Manual Catalogues - Caption in Chapman's hand-written list of negatives made whilst on the Mission to Lhasa, 1936-7 [See PRM Manuscripts Collection]: 'Tsarong’s house (panorama) left half'