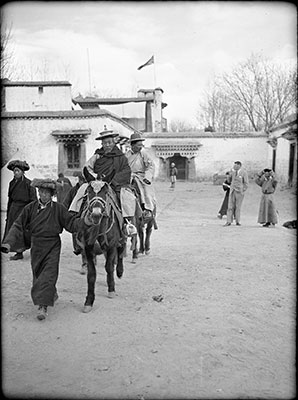 In Negative - '12' has been scratched into the bottom right hand corner of the negative. This has enabled identification of the image as 'C.17.12' in Chapman's list of negatives made whilst in Lhasa [MS 27/03/2006]

Manual Catalogues - Caption in Chapman's hand-written list of negatives made whilst on the Mission to Lhasa, 1936-7 [See PRM Manuscripts Collection]: 'Kalon Lama and Pendong riding away for lunch wants masking' [MS 27/03/2006]

Other Information - Related Images: Images prefixed with 'C.17' comprise a group of negatives containing images of Palden Lhamo procession down street, Kalon lama and Bhondong, Regent’s house and monastery. This group of images had been given the heading “‘Queen Vic’ Procession” by Chapman in his handlist. Queen Victoria was reputed to have been an incarnation of Palden Lhamo [see notes for C.17.7]. They seem to have been taken between November 26th - December 11th 1936, with this particular image being taken on December 4th [MS 27/03/2006]

Other Information - Setting: Mission Diary entry for December 4th 1936: "Bhondong Shappe and Kalon Lama, both members of the Kashag, came to lunch. Today it is cold and wintry, and a bitter wind is raising dust storms" ['Lhasa Mission, 1936: Diary of Events', Part X p. 2, written by Chapman] [MS 27/03/2006]