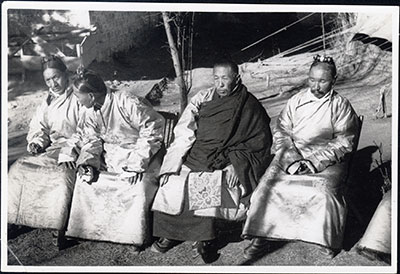 The four Shappes of the Lhasa Cabinet sitting outside at a New Year's party at the Dekyi Lingka. They had previously handed over a permit to mount an expedition to climb Mount Everest in 1938 to the Mission. Left to right: Tendong, Bhondong, Kalon Lama, Langchunga. Tents belonging to the Mission can be seen in the background. From a related image [1998.131.463] it seems that Bhondong is leaning across to talk to Tsarong Dzaza, who is seated just out of frame on the left. A sixth official is seated next to Langchunga on the right

Manual Catalogues - Caption in Chapman's hand-written list of negatives made whilst on the Mission to Lhasa, 1936-7 [See PRM Manuscripts Collection]: '4 Shapes talking' [MS 27/03/2006]