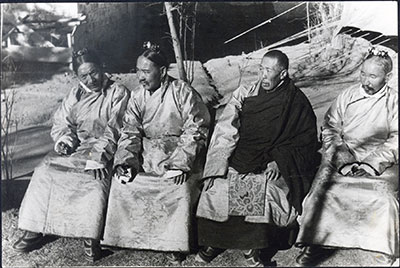 The four Shappes of the Lhasa Cabinet sitting outside at a New Year's party at the Dekyi Lingka. They had previously handed over a permit to mount an expedition to climb Mount Everest in 1938 to the Mission. Left to right: Tendong, Bhondong, Kalon Lama, Langchunga. Tents belonging to the Mission can be seen in the background

Notes on print/mount - The print is covered in crop and reproduction marks. The caption "The Four Shappes - the Lhasa Cabinet - Tendong, Bhondong, the Kalon Lama, Langchungna" has been written on the back in pencil, as has the reference number 'B-J-13' [MS 27/03/2006]