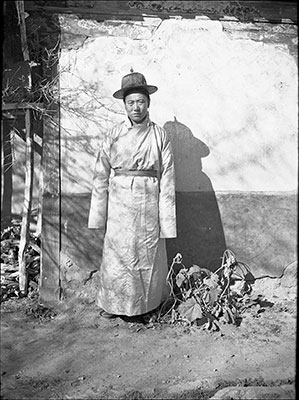 Tsoko, Sonam Wangdi, the new Depon at Kham, visiting the Dekyi Lingka. Full length portrait of Tsoko showing brocade silk outer garment or chuba. Standing next to a doorway with some painting visible on the woodwork

Manual Catalogues - Caption in Chapman's hand-written list of negatives made whilst on the Mission to Lhasa, 1936-7 [See PRM Manuscripts Collection]: 'New depon in garden' [MS 27/03/2006]

Other Information - Setting: Mission Diary for December 1st 1936: "Another dinner and cinema show this evening. Nyemo Dongkar Wa, a 4th rank official at present unemployed, and Tsoko, the newly appointed Depon in Kham, were our guests. As usual each brought a considerable female and retinue and many servants" ['Lhasa Mission, 1936: Diary of Events', Part IX p. 2, written by Chapman] [MS 27/03/2006]