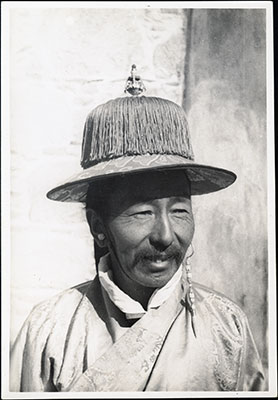 High ranking government official, Rai Bahadur Norbhu Dhondup OBE, CIE, in hat usually worn in summer despite the fact that this image seems to have been taken at the beginning of December. Worked as adviser and official interpreter to the 1936 British Mission to Lhasa

Biographical Information - Rai Bahardur Norbhu OBE, CBE (1904-1947) was the confidential clerk to the British Political Officer for Sikkim, Bhutan and Tibet. He was born in Kalimpong (Sikkim) and had no aristocratic connections but in school in Darjeeling was chosen to be an interpreter for Colonel L. A. Waddell (the scholar and doctor) during the Younghusband Expedition of 1903-1904. When Youngshusband left Lhasa he refused to go with him as he was engaged to a Tibetan girl and was treated as a deserter. However, he was used by the British as an interpreter again when the Panchen Lama visited India in 1905. He then served as confidential clerk to the British Trade Agent in Gyantse and the Political Officer for Sikkim, Bhutan and Tibet. In 1920 he accompanied Sir Charles Bell to Lhasa and in 1923 visited again with Leiut.-Col. Bailey. In 1927 the 13th Dalai Lama made him a depön (general) in the Tibetan army. In 1928 he organized and accompanied Leiut.-Col. Weir’s visit to Lhasa and in 1934 was ordered to Lhasa to counteract the Chinese Mission. Following the death of Frederick Williamson in Lhasa in 1935, Norbhu became Gould’s confidential clerk for the 1936 Mission. He reported that his life had been endangered numerous times by Russian and Chinese agents during his trips to Tibet but pledged, “I… shall not die before I murder at least two, as I have my rifles and my pistols always loaded”. Gould writes of him “his greatest asset was the fact that he was a man who had no guile in him. He was full of life and experience and he was trusted. The only time I ever saw him put out was when I told him that it was not customary to wear both O.B.E and C.B.E. decorations at the same time. Some years later, an hour before he died, he sat up in bed and called the doctors fools for suggesting that he was ill… He had little education, lots of common sense, a ready laugh and infinite guts”. (1957:XX) Norbhu died in 1947 of tuberculosis. [CH 2003]