One of the Trunyik Chempo, Dekyi Lingka 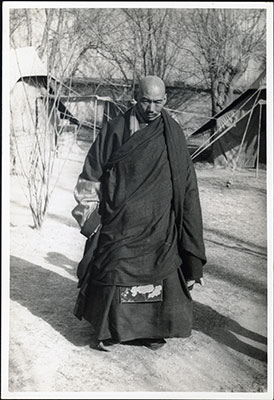 One of the Trunyik Chempo, or leaders of the Ecclesiastical Party who acted as personal secretaries to the Dalai Lama. Mission tents in background. On this day the Mission had invited the four Trunyik Chempo to lunch at the Dekyi Lingka

Manual Catalogues - Caption in Chapman's hand-written list of negatives made whilst on the Mission to Lhasa, 1936-7 [See PRM Manuscripts Collection]: 'T.C [Trungi Chumbo] others on full v.' [MS 24/03/2006]