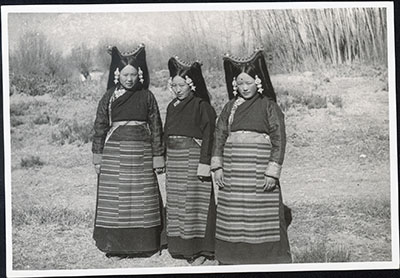 Three women, probably daughters of aristocrats, at a party at the Dekyi Lingka on New Year's Day, 1937. They have applied beauty spots to their faces. They probably participated at the party as so-called 'chang girls' who had a role in ensuring that the party was a success

Other Information - Cultural Background: Although Chapman refers to these girls and others like them as Chang girls who pass out the alcohol at social events, the high quality dress and expensive jewellery they are wearing suggests that they are the daughters of aristocratic families who have come along to assist with serving the guests. The girls are all wearing their amulets tucked inside their chuba because they are so heavy that they want to prevent the amulet moving around too much or breaking the silk string from which they are suspended. Sometimes beauty spots are made from a sticky gum, which is also supposed to be good for the skin and for health [TS 14/2/2005]

Other Information - Related Images: Images prefixed with 'BJ' comprise a group of negatives containing images of the Lhasa band, chang girls, Tibetan officials including Tsarong and Ringang, Finch, Norbhu, Everest Permit and Khampa people. They all seem to have been taken between January 1st - 7th 1937, with this particular image being taken on January 1st [MS 24/03/2006]

Other Information - Description: Entry in Mission Diary for January 1st 1936 in which the party was described: "One reason for our feeling of comfort and good cheer was to be found in the activities of the Chang Girls. Normally these girls, resplendent with turquoise ornaments and coral and pearly head-dress, wait on the guests and keep their glasses full of chang. They also force guests to drink by jogging their arms and saying "tunda-ro-nang" (empty it, please). In really obstinate cases they are allowed to use a pin - even on the Prime Minister himself. But on this occasion most of us were drinking whiskey, and once the girls had mastered the art of using a soda-water syphon there was no stopping them; and on more than one occasion they attempted to fill up the glass with neat whisky" ['Lhasa Mission, 1936: Diary of Events', Part XII p.2, written by Chapman] [MS 24/03/2006]