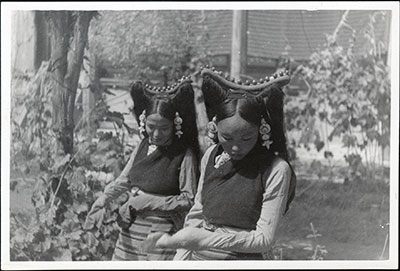 Two dancing girls at the Dekyi Lingka where they performed at a lunch given for the Mission by the Tibetan Government. The Mission could accept no other lunch invitations with lesser officials until this lunch had been held. It had been delayed because of Sir Basil Gould's ill health

Other Information - Cultural Background: Although it was sometimes stated by members of the Mission that the long sleeves seen here are intended to be a mark of respect, in fact their main purpose is to add to the aesthetic effects of the dance. The top of the head dress is made of red felt and then corals would be attached to it. The hair hanging down over each head dress are is a wig [TS 14/2/2005]

Other Information - Description: The official Mission Diary for September 18th 1936 describes this event, and its comments on the women depicted here is revealing for some of the assumptions and misconceptions that Mission members would often make of the role and status of Tibetan women who attended these official functions either as dancers or 'Chang girls'. This extract was written by Hugh Richardson who went on to spend many years in Lhasa between 1936-50 and was to become a much more sensitive observer and leading British authority on Tibetan culture over the course of his time there: "The Tibetan Government entertained us to lunch in our garden at the Dekyi Lingka. They have been waiting for Mr Gould to recover and fortunately he was quite well enough to attend today. // Until the Cabinet have given the official Government Lunch no one, not even the Regent, can invite the Political Officer to a party. // As usual the Kashag's time and ours did not agree on their first visit they were an hour early; on the second an hour late, this time they arrived half an hour before they were expected. We were entertained before and during the meal by an orchestra of stringed instruments and a flute, and by dancing girls. ... // The musicians went at it with great persistence and their efforts seemed to improve as the party progressed. To their music danced three 'girls'. one about 50, the other two quite young. The dancing consisted simply of stamping on a plank in time to the music, varied by an occasional gesture with the hands and arms (which were hidden, out of respect, by long sleeves), and by occasional bursts of shrill singing. Not really very exciting for us and, to judge by the solemn expression of the girls, not very exhilarating for them. The dancers were of so low an order of society that they could not dare to look openly at the Political Officer not at the Great Powers of the Earth, as the Shapes are called" ['Lhasa Mission, 1936: Diary of Events', Part VI p.3, written by Richardson] [MS 24/03/2006]