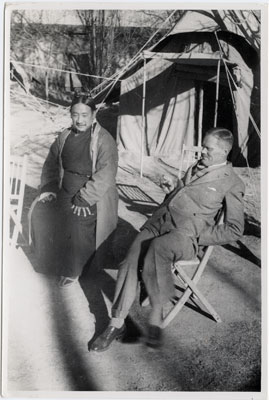 Ringang (Kusho Chango Pa) and Major Finch, the newly appointed officer in command of the British escort stationed at Gyantse, sitting outside a tent in the grounds of the Dekyi Lingka

Manual Catalogues - Caption in Chapman's hand-written list of negatives made whilst on the Mission to Lhasa, 1936-7 [See PRM Manuscripts Collection]: 'Ringang and Finch'; [MS 23/03/2006]

Other Information - Dates: Major Finch was in Lhasa from December 24th 1936 to January 2nd 1937. Ringang was a regular visitor to the Mission residence at Dekyi Lingka, but there is mention of his whole family visiting the Mission on December 29th to attend the Christmas party that was held for the children of Tibetan officials. This may have been the occasion on which this photograph was taken as both men are in relatively casual dress [MS 23/03/2006]

Other Information - Related Images: Images prefixed with 'BJ' comprise a group of negatives containing images of the Lhasa band, chang girls, Tibetan officials including Tsarong and Ringang, Finch, Norbhu, Everest Permit and Khampa people, all apparently taken in the first week of January 1937. Major Finch was in Lhasa from December 24th 1936 to January 2nd 1937 and so this image must have been taken between those dates [MS 16/03/2006]