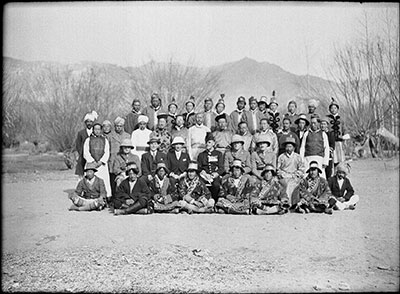 The whole of the 1936 British Mission to Lhasa. Sir Basil Gould can be seen in full uniform in the centre. The main mission party was preparing to go to the Potala later in the morning, the wearing of formal dress for the occasion providing an opportunity to take photographs

Manual Catalogues - Caption in Chapman's hand-written list of negatives made whilst on the Mission to Lhasa, 1936-7 [See PRM Manuscripts Collection]: 'Whole party out of focus. Nurgul on extreme left' [MS 22/03/2006]