Nepean and Morgan at Dekyi Lingka 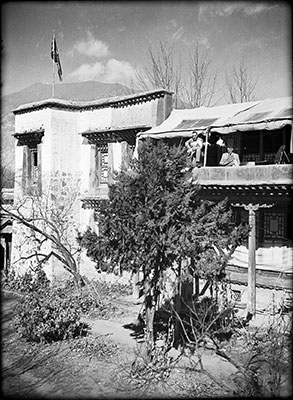 Part of the Dekyi Lingka, the British Mission house. Two members of the British Mission on balcony, Evan Nepean on the left, who was the wireless operator, and Capt. Morgan on the right, the Mission doctor. A British flag can be seen on the roof. This image forms the left side of a panorama, the right side being seen in 1998.131.377

Manual Catalogues - Caption in Chapman's hand-written list of negatives made whilst on the Mission to Lhasa, 1936-7 [See PRM Manuscripts Collection]: 'Pan [Panorama] left part of our house [Dekyi Lingka]' [MS 22/03/2006]

Other Information - Description: The Dekyi Lingka (“garden of happiness”), home to the British in Lhasa for several decades, with Union Jack flying and 1936 Mission members Nepean and Morgan on the balcony. Spencer Chapman recorded the living arrangements: “We found the actual house somewhat small for our requirements. Gould and Neame occupied two minute rooms upstairs; the doctor took possession of an even smaller ground-floor room opening off the tiny kitchen courtyard, while Richardson and I put up our tents in the walled garden. There was one rather gloomy downstairs room which we used as a dining-room, and a more cheerful one above with a verandah that we roofed in with canvas and used for receptions. Neame’s bedroom afterwards became Gould’s office, while the five Sikkimese clerks had a large office a hundred yards from our house. The kitchens and stables were part of the main building. Norbhu found quarters just outside our main doorway between the kitchen and the stables”. ['Lhasa: The Holy City', F. Spencer Chapman, London: Chatto & Windus, 1938, pp 229-230] [CH 2003]