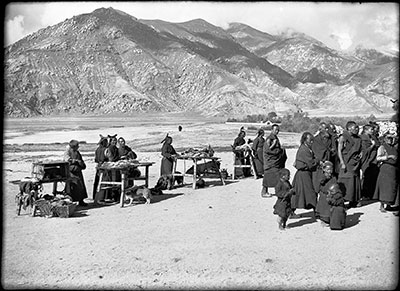 Meat sellers and other stalls outside Sera monastery. Women seem mainly to be in charge of the stalls while a group of Tibetan monks and lay people stand to the right in the image. Sera plain visible in background

In Negative - '18' has been scratched into the negative in the bottom right hand corner. This has enabled identification of the image as 'C.4.18' from Chapman's handlist of negatives made whilst in Lhasa [MS 22/03/2006]

Manual Catalogues - Caption in Chapman's hand-written list of negatives made whilst on the Mission to Lhasa, 1936-7 [See PRM Manuscripts Collection]: 'Meatsellers and monks outside Sera' [MS 22/03/2006]

Other Information - Related Images: Images prefixed with 'C.4' comprise a group of negatives containing images of soldiers, turning prayer wheel, horns and rock paintings, paintings, Dr Morgan and mission hospital, beggar with skull and drum, monks outside Sera, meat seller, water tanks. They all seem to have been taken on about September 8th 1936 [MS 22/03/2006]