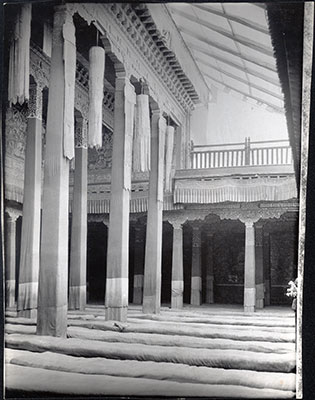 Interior of Sera Monastery. One of the Assembly Halls, with many pillars covered with textiles and with textile banners hanging from the joists. Elaborate wall paintings can bee seen around the upper walls of the room. Cushions upon which the monks would sit are positioned in rows across the floor

Manual Catalogues - Caption in Chapman's hand-written list of negatives made whilst on the Mission to Lhasa, 1936-7 [See PRM Manuscripts Collection]: 'Sera interior'; PRM Manuscripts Collection: ‘List of Tibetan Prints and Negatives’ - Book 2: ‘19/3 - A hall in Drepung monastery with cushions for monks’. Note: Although the latter comment identifies this as being in Drepung Monastery, the photographic reference number indicates that this is one of a series of images taken in Sera [MS 22/03/2006]

Other Information - Cultural Background: Tibetan rooms are measured by the number of pillars that they have. [TS 7/2/2005]

Other Information - Cultural Background: Usually there would be a rough covering over the cushions where the monks would sit but that is not visible here suggesting that it has been removed for cleaning or some other reason [TS 7/2/2005]