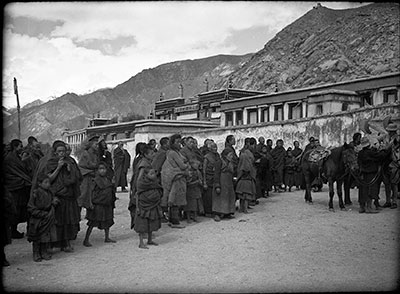 Group of monks and lay people at Sera monastery. Member of British Mission staff (possibly Evan Nepean) by horses on right of image

Manual Catalogues - Caption in Chapman's hand-written list of negatives made whilst on the Mission to Lhasa, 1936-7 [See PRM Manuscripts Collection]: 'Crowd outside Sera' [MS 21/03/2006]

Other Information - Related Images: Images prefixed with 'C.8' comprise a group of negatives containing images of the Potala and Lhasa, officials coming through Pargo Kaling, the Turquoise Bridge, Tsarong, Trimon, views from and of Sera, a woman washing clothes, a shepherd with sling, and football teams. They all seem to have been taken between October 13th - 20th 1936 [MS 17/03/2006]

Other Information - Can see a member of the Mission on the extreme right wearing a solar topi; behind him some monk's hats can also be seen suspended on a pole [TS 7/2/2005] This is possibly Evan Yorke Nepean [MS 21/03/2006]