Drepung Monastery from below 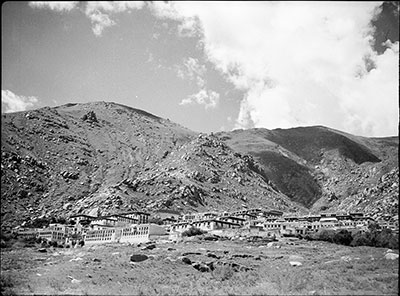 Drepung Monastery from below. The monastery's buildings have been foreshortened in this image taken from below, giving a misleading impression of its real size

Other Information - Related Images: It has been possible to identify this image because of the number printed on the bottom of the negative. It relates to the group of images prefixed 'C.2.' which comprise a group of negatives containing images of the treasurer, a panorama from Drepung, views from Sera and Nechung monastery. They seem all to have been taken on August 30th 1936 [MS 12/03/2006]

Other Information - Setting: "Being Sunday Gould had arranged to have a rest from visitors and arranged a visit to Drepung Gompa, the biggest gompa in Tibet or in the world for that matter. ... The gompa is like a great town on a steeply rising hillside 5 miles out of Lhasa and the numerous buildings, halls and temples rise perforce in terraces with steep alleys and steps between. ... We then proceeded to the "Nachung" or temple of the Great Oracle of Tibet, a mile from Drepung Gompa, where we had a pic-nic lunch under a grove of trees at which we entertained our Tibetan guides and our own clerks, who had accompanied us to Drepung, much to their delight" ['Lhasa Mission, 1936: Diary of Events', p.7, written by Philip Neame] [MS 12/03/2006]

Other Information - Historical Background: Founded In 1416 by a disciple of Tsongkhapa, Jamyang Choje. Was the centre of political power in Tibet before the Potala and after continued to be an active presence. Gelug-pa Sect, commonly known as the Yellow Hat Sect, the Reformed Sect of Buddhism it means 'the Virtuous People'. [Marina de Alarcón ZF 1995.1]