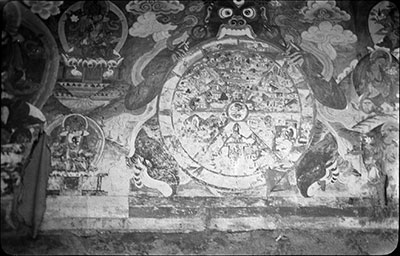 In Negative - 'YN 11' has been scratched into the bottom edge of the negative. This helps to identify the image as having been taken by Evan Yorke Nepean

Other Information - Cultural Background: Found at the entrance to most Monasteries, it explains the Cycle of Rebirths, the Law Of Karma and the Approach To Nirvana. Because many Tibetans could not read, visual didactic paintings were very important in bringing about an understanding of the Dharma. [Marina de Alarcón ZF 1995.1]