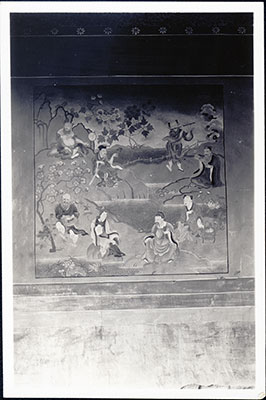 Painting on wood in Chinese style on wall in Norbu Lingka stable depicting Arhats and attendants.

Manual Catalogues - Caption in Chapman's hand-written list of negatives made whilst on the Mission to Lhasa, 1936-7 [See PRM Manuscripts Collection]: 'Figures grouped around lake' [MS 21/03/2006]

Other Information - Cultural Background: Chinese style painting is often seen as decoration on wooden furniture, however, this scene has a more obviously religious intent [TS 17/2/2005]