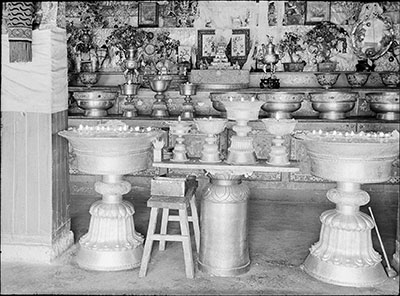 Three storey chorten containing the tomb of the 13th Dalai Lama in the Potala Palace. Silver butter lamps and other offerings surround the shrine. The chorten is encased in gold and inlaid with precious stones and surrounded by gifts from China, Mongolia and Tibet

Manual Catalogues - Caption in Chapman's hand-written list of negatives made whilst on the Mission to Lhasa, 1936-7 [See PRM Manuscripts Collection]: 'Lower part of last D.L.’s shrine - big lamps in foreground and details of shrine' [MS 18/03/2006]

Other Information - Cultural Background: The large containers at the front are for butter lamps and are usually made of metal [TS 7/2/2005]