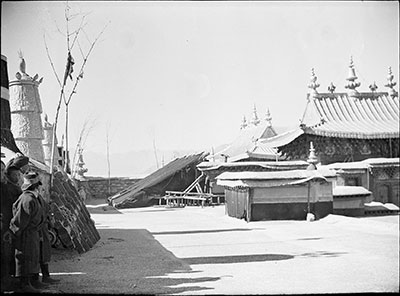 Roof of the Potala Palace, golden pagoda roofs of the tombs of past Dalai Lamas. Yak-hair blanket laid on frame possibly because of painting work undertaken on tomb of 13th Dalai Lama. Wooden frames seen stacked up along wall. Paintings on tomb wall faintly visible

Other Information - Historical Background: The screen with the yak-hair blanket draped across, apparently protecting one side of the 13th Dalai Lama's tomb, may have been in place because of the painting work that was taking place around the newly built mausoleum at that time. Chapman describes this quite fully in his publication Lhasa the Holy City [London: Chatto & Windus 1938; reprinted London: Readers Union Ltd., 1940, p.180]: "On the upper story of the tomb, which surrounds the chorten like a balcony, some fifteen of the best Tibetan artists were at work on a series of thankas illustrating the life-story of the Dalai Lama. It was interesting to see them at work. They were obviously men of some standing, as each wore the long turquoise and gold ear-ring. They wore white shirts, indigo or purplish broadcloth robes, and black top-boots. They worked on fine canvas, which had been prepared and stiffened with white paint; this was stretched over a wooden frame about four feet high and two and a half feet wide, which they rested on their knees, as they sat cross-legged on the floor. The paints, made of stones and earths (many of them imported from India) ground up with oil, were in separate porcelain saucers. The brushes, of which each painter used several, appeared to be of hog's bristle. The work was extremely fine and they showed great accuracy and skill, though they all painted in the conventional manner so that it would have been difficult to pick out the work of individual artists. The Potala, considerably conventionalized, appeared in many of the paintings, also procession of monks, street scenes, and landscapes, as well as the usual Buddhas, curly clouds, and stiff formal flowers. As is usual with Tibetan pictures, every corner of the canvas was filled up. Each artist had his wooded teacup and tsamba bag beside him, and seemed to drink every few minutes". [MS 11/4/2005]