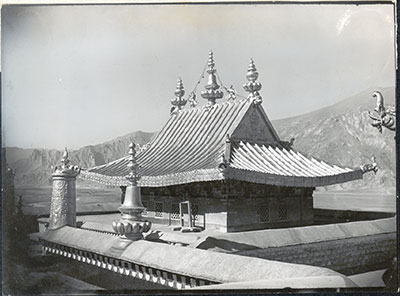 Copper pagoda covering the 13th Dalai Lama's tomb on the roof of the Potala Palace. Water spouts visible on the right

Notes on print/mount - The back of the print is covered with a variety of crop and reproduction instructions and reference numbers. These include the reference 'C/18/20' written in pencil on the centre back of the print. This relates to the numbering system than Chapman adopted for photographs taken whilst on the British Mission to Lhasa in 1936-7. The annotation '8 - 4 7/16' has been written alond the bottom right hand edge of the print in red crayon, and '42a' has been written in pencil in the top left hand corner. This has been partially concealed by a piece of tracing paper that has been stuck to the back of the print and folded over the front. This paper also partially obscures the caption, written in pencil, 'Pagoda covering late Dalai Lama's tomb'. A further piece of paper, which has been torn off, seems to have been stuck on the back of the print previously; the name 'Chatto and Windus' is partially discernible. This was the publisher of Chapman's account of the mission to Lhasa, Lhasa the Holy City [London, 1938]. The tracing paper bears the caption on the front, written in pencil, 'Pagoda covering the late Dalai Lama's tomb'. Reproduction size marks in pencil and the letter 'H' in red wax crayon have been written on the front of the sheet. A matt grey effect has been applied to the sky. This has the effect of making the building appear to stand out from the background and intensifying the appearance of the whites and blacks in the print [MS 11/4/2005]

Manual Catalogues - Caption in Chapman's hand-written list of negatives made whilst on the Mission to Lhasa, 1936-7 [See PRM Manuscripts Collection]: 'Tomb of last Dalai Lama'; PRM Manuscripts Collection: ‘List of Tibetan Prints and Negatives’ - Book 2: ‘6/1 - Golden pagoda covering shrine of the “Great Thirteenth” and last Dalai Lama who died in 1933 - not counting the present one who was discovered in 1938’ [MS 18/03/2006]

Other Information - Related Images: Images prefixed with 'C.18' comprise a group of negatives containing images of the mission personnel, the Dalai Lamas’ tombs and Potala. They were all taken on November 22nd on the day of the second official visit of the Mission party to the Potala [MS 18/03/2006]

Other Information - Setting: This photograph was taken on November 22nd 1936. In the official Mission Diary Brigadier Philip Neame wrote on September 6th 1936, following the first visit of the Mission party to the Potala: "We went on to the topmost roof of the Potala and saw the gold covered pagoda like roofs of all the past Dalai Lamas' mausoleaums. Finally we saw the last Dalai Lama's (the 13th incarnation) recently completed tomband shrine. This is the most striking thing in the Potala." In his book Lhasa the Holy City [London: Chatto & Windus 1938; reprinted London: Readers Union Ltd., 1940] Chapman describes this tomb more fully: "[The tomb] of the last Dalai Lama had only recently been completed, and in proportion to his greatness it far exceeds all the others in splendour. It is interesting to see that the work done in Lhasa today is apparently indistinguishable from similar work carried out at various times since the seventeenth century, when the palace, in its present form, was built. // Considerable structural alteration has been necessary to fit in this tomb, which rises through three complete stories of the building. It can be seen ... that the part which lies to the left (or west) of the central red portion has been rebuilt; and as it is now incorporated in the especially holy part of the Potala, it has been painted red. It is a great pity that the chorten is not housed in a larger room so that one could stand back and see it in its entirety" [1940, pp. 178-9] [MS 11/4/2005]